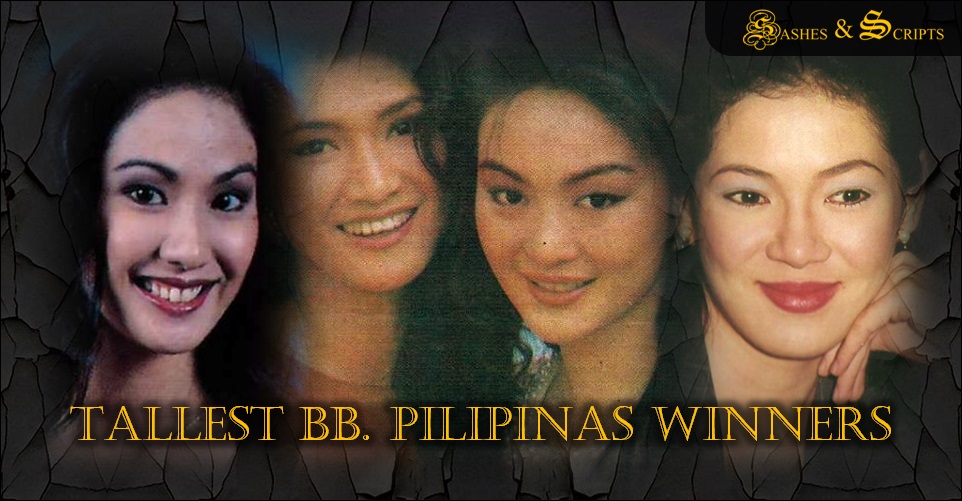 They say that height is might in pageants, so we listed down the tallest Binibining Pilipinas winners. Since its inception in 1964, the Binibining Pilipinas pageant has attracted ladies of various shapes and sizes. Its minimum height requirements have ranged from 5’4″ to 5’6″ throughout the years, although no maximum height requirement is ever imposed.

Disclaimer: We only included in this list those that we are able to get reliable sources on the heights of the Binibining Pilipinas winners. Those that we are doubtful of their heights we didn’t include on the list.

HEIGHT INCONSISTENCIES
There are also a number of BBP winners whose reported heights are inconsistent depending on the news articles we’ve read. Height padding was not uncommon in pageants so there should be no surprise that there are some inconsistencies on the heights of some past winners.
Some reports have mentioned that Binibining Pilipinas World 1993 & Miss World 2nd Princess, Sharmaine “Ruffa” Gutierrez stands at 5’10” while others say she’s 5’9″ or 5’9 1/2″.  Binibining Pilipinas Universe 1995 Joanne Quintas is also reported to be 5’10” tall while some sources put her at 5’9″. Resigned Bb. Pilipinas World Janina San Miguel is also being reported to stand between 5’9 1/2″ to 5’10 1/2″ tall.

THE TALLEST BINIBINI WINNER
Binibining Pilipinas World 1992, Marilen Espino – 6’0”
It is so heartbreaking that the tallest BBP winner we ever had wasn’t able to compete in any international pageant. Weeks before leaving for the Miss World pageant in Sun City, South Africa, Marilen contacted chicken-pox and wasn’t able to compete. Instead, Marina Benipayo was sent to Miss World. Marilen was then to compete in Miss Maja International but the pageant was cancelled that year. Marilen was a Supermodel of the Philippines winner much like other BBP winners (Abbygale Arenas, Caroline Subjano and Melanie Marquez for instance).

Jesson Capuchino is fashion retail professional of over 10 years, worked as a marketing adviser to one of the biggest fashion companies in Southeast Asia, and a pageant connoisseur since 1994. He is the resident blogger of the pageant portal Sash Factor and a social-media content creator of its Facebook page. A graduate of the BS Clothing Technology program of the University of the Philippines, he has lived outside of the Philippines and traveled to New York, London, Seoul, Singapore and Dubai for assignments with various international brands. His passion in writing, illustration and pageantry converge in this blog.
%d bloggers like this: